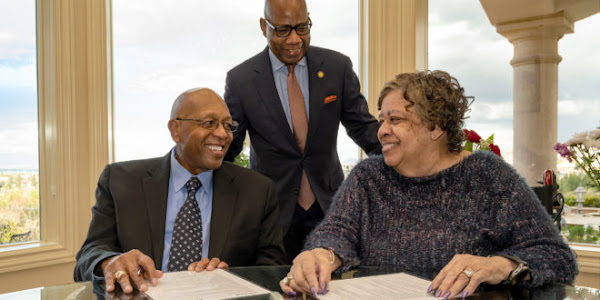 Morgan State University today announced receipt of a $20 million commitment from alumnus and philanthropist Calvin E. Tyler Jr. and his wife, Tina, increasing an endowed scholarship fund previously established in the Tylers’ name. The monumental gift is the largest private donation from an alumnus in University history and is believed to be the largest contribution of its kind to any Historically Black College or University (HBCU) nationwide from an alum.

In 2016, the Tylers made a commitment of $5 million to the University— at the time the largest in Morgan’s history—bolstering the Calvin and Tina Tyler Endowed Scholarship Fund established in 2002 to provide full tuition scholarships for select need-based students residing in the Tylers’ hometown of Baltimore. In light of the financial hardships and challenges a number of students and their families are facing as a result of the current pandemic, the Tylers were compelled to expand their giving. Once exclusive to students from Baltimore, the endowed scholarship is now national in scope and will benefit generations of future Morgan students seeking a college education. To date, the endowed fund has supported 222 Morgan students by way of 46 full-tuition and 176 partial scholarships, with the promise of benefiting more ‘Tyler Scholars’ with the increased multimillion-dollar pledge and expanded scope.

“Morgan is so proud to call this son and daughter of the great City of Baltimore our own, and through their historic giving, the doors of higher education will most certainly be kept open for generations of aspiring leaders whose financial shortfalls may have kept them from realizing their academic dreams,” said David K. Wilson, president of Morgan State University. “For public institutions, like Morgan, our charitable alumni are testaments to the legacy we collectively uphold, and the Tylers’ generosity over the years, culminating with this transformative commitment, is a remarkable example of altruism with great purpose. We are forever indebted to the Tylers.”

Calvin Tyler enrolled at Morgan State College in 1961 to study business administration. The first of his family to attend college, he later interrupted his matriculation in 1963 due to lack of funding and eventually took on a job as one of the first 10 UPS drivers in Baltimore in 1964. At UPS, he would then work his way up, climbing the corporate ladder, ultimately ending up as senior vice president of operations before his retirement in 1998, and joining the company’s board of directors. Through his 34-year career at the multinational package delivery company, Tyler never lost sight of his own humble beginnings, committing with his wife Tina to support those who, like him, encountered hardships and financial insecurities while pursuing their college degree.

“My wife and I have become keenly aware of the effect that the pandemic has had on a number of young people trying to get an education [and] we have the resources to help a lot of young people,” Tyler shared. “This is why we are increasing our commitment at Morgan; we want to have more full tuition scholarships offered to young people so that they can graduate from college and enter the next stage of their life debt free.”

Students attending Morgan come from diverse backgrounds, often with unique circumstances, and a myriad of financial needs with 90% of students receiving financial aid. Students applying for the Tyler Scholarship must meet certain financial criteria and maintain a minimum GPA requirement of 2.5.

“Endowed scholarships and other gifts have far-reaching implications for any institution, but for a public, urban university like Morgan, with students from a broad spectrum of academic, social and economic backgrounds, the need is especially great,” said Donna Howard, vice president for Institutional Advancement. “We are forever grateful to the Tylers for their unrelenting charity to alma mater. The impact of their generosity will have a prevailing effect fostering Morgan-made leaders for generations.”

Fulfillment of the Tylers’ $20 million pledge will be executed for years to come, ensuring an enduring support for Morgan students facing extenuating financial circumstances. Through this commitment and the recently constructed student services building bearing their name—Tyler Hall—their connection to Morgan and their legacy of philanthropic giving will be forever cemented.

“We’re trying to help young people succeed and this goal is aligned with Morgan’s mission; it’s such a perfect fit. We believe that Morgan State happens to be the best institution to use these resources,” added Mr. Tyler.

The $20-million commitment from the Tylers comes to Morgan amid a span of unprecedented and transformative giving to the University that will serve Morgan students—in the immediate and distant future—including an historic gift of $40 million from philanthropist MacKenzie Scott, the largest in the University history. The Tylers’ gift now marks the second largest to be received.

Expressing the importance of giving and supporting institutions of higher education, Tyler contends that “reliance on government loans is just not the answer. Debt can be extremely crippling to someone trying to get ahead in life [and] we just want to help as many young people as we can [to] get an education.”