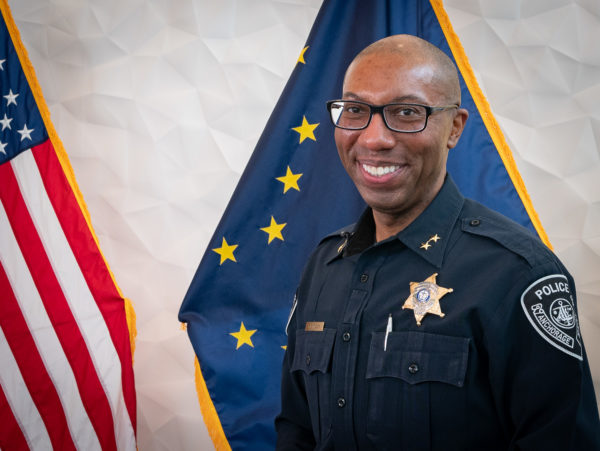 The Anchorage Police Department will have its first ever Black chief of police when Kenneth McCoy starts next Monday.

McCoy, currently the deputy chief of police, replaces Justin Doll, who will be on leave until he officially retires over the summer.

“For an announcement like this to be made during our 100th year, that our first African American chief is going to be at the helm, is very humbling and meaningful to me, and to my family, to this community,” McCoy said. “And I think it serves as a sign of hope that, you know, we can come together and we can heal and we can make positive change.”

McCoy has served in the city’s police department for almost 30 years. He has worked in the patrol division, detective division and internal affairs division and has been the deputy chief for past four years.

“Over the course of his 27 years at APD, Ken has shown calm, steady and collaborative leadership that welcomes diverse perspectives and experiences,” Acting Mayor Austin Quinn-Davidson said in a statement. “This is an historic moment for our community; we are so fortunate to have Ken at the helm.”

McCoy said his top priorities as acting police chief will be to increase trust and transparency within the community.

“I think that’s our biggest challenge because a large portion of the community and, particularly communities of colour, have lost confidence in law enforcement, nationwide, and you know, it’s my goal on a daily basis to work to build that trust with our communities so they can feel good about what their police departments are doing,” McCoy said.

“I am grateful for the support from the Mayor’s office, the Assembly and, most importantly, our community,” McCoy said. “Anchorage is a great community! It is my hope that we can come together, heal, and work toward positive change.”