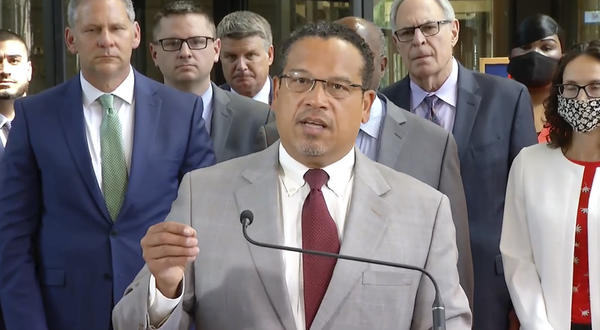 Minnesota Attorney General Keith Ellison delivered the following statement upon the sentencing of former Minneapolis police officer Derek Chauvin to a term of 22.5 years for his conviction on charges of second-degree unintentional murder, third-degree murder, and second-degree manslaughter in the May 25, 2020 death of George Floyd:

The sentence the court just imposed on Derek Chauvin — 22.5 years — is one of the longest a former police officer has ever received for an unlawful use of deadly force. Like the conviction of Derek Chauvin two months ago, today’s sentencing is not justice, but it is another moment of real accountability on the road to justice.

It’s difficult to see anyone lose their freedom — but seeing somebody lose their life over nine minutes and a half minutes is incomparably worse. Those minutes and seconds are inerasably seared into the minds of people across the world who watched George Floyd die — above all, the heroic people who stopped and bore witness to George Floyd’s death and who came forward a year later to testify about what they saw, and the Floyd family themselves. The lives of everyone who saw it are forever changed.

My hope for Derek Chauvin is that he uses his long sentence to reflect on his choices and his life. My hope is that he will be able to find it within himself to acknowledge the impact of his choices on George Floyd, his family, his fellow police officers, and the world. My hope is that he takes the time to learn about the man whose life he took and about the movement that rose up to call for justice in the wake of George Floyd’s death.

Today is also an important moment in the history of our country. The outcome of this case is critically important — but by itself, it’s not enough. My hope for our country is that this moment gives us pause and allows us to rededicate ourselves to real societal change that will move us much farther along the road of justice. I’m not talking about the kind of change that will take decades: I’m talking about real, concrete change that real people can make now.

I’m speaking to lawmakers. At this historic moment, there is so much legislation around the country — in city councils, county boards, state legislatures, and Congress — that is still waiting to be passed. If these bills were passed, they would make deaths at the hands of law enforcement less likely, would improve police-community relations, would restore trust and therefore cooperation, would improve the lives of police officers who want to protect and serve, and would make everyone safer. Every one of these bills — at every level of government — is critical for helping our families, communities, and country heal.

Above all, Congress has still not passed the George Floyd Justice in Policing Act. I call on leaders and members of Congress to pass the strongest version of the bill that can be passed — and pass it now. Lives are depending on it. It’s that simple.

I’m speaking to law-enforcement leaders. At this historic moment, law-enforcement leaders are in a position finally to put in place policy, training, and mechanisms that build-in real accountability — and the elected leaders they answer to must support and empower them in it. When there is distrust between community and police, there is less cooperation between community and police. And at a moment, where violent crime is spiking across the nation—from major cities to rural communities—we simply cannot afford that schism. Trust and cooperation are the answer to a safer community. We cannot have trust and cooperation without accountability.

To them I say, make no mistake: this is something your officers are asking for. In the aftermath of George Floyd’s death, 14 Minneapolis police officers signed an open letter condemning Derek Chauvin’s actions and embracing the call for reform and change. These 14 were speaking for hundreds across the country.

Why do police officers want accountability? Think of how the nine-year-old girl, wearing a love t-shirt, who witnessed Floyd’s murder will feel from now on when she thinks about law enforcement. Think about what anyone in the community affected by Floyd’s murder will think.

It’s not fair to judge all police officers by Derek Chauvin’s actions, but some people inevitably will generalize, unless there is accountability. You just can’t heal a dirty wound. And when there is little trust, there is little safety.

When law-enforcement leaders take clear steps to build in accountability — and prioritize the wellness of their officers — they will have their officers’ respect, trust between officers and the people they serve will grow, and all communities will be safer.

I’m speaking to prosecutors. We believe that no one is above the law, and no one is beneath it. When after thorough review, prosecutors believe we have probable cause that anyone — including someone operating in an official capacity — has violated the law, our prosecutions must be vigorous, visible, and swift.

This is what we need to do. What will happen if we don’t do it?

We will slip deeper into our century-long cycle of inaction.

Time is up. Nothing less will do. The country is counting on us. We are counting on each other.

Finally, I want to thank once again this extraordinary prosecution team, the Floyd family, The Hennepin County Attorney’s Office, and the witnesses who courageously stepped forward.