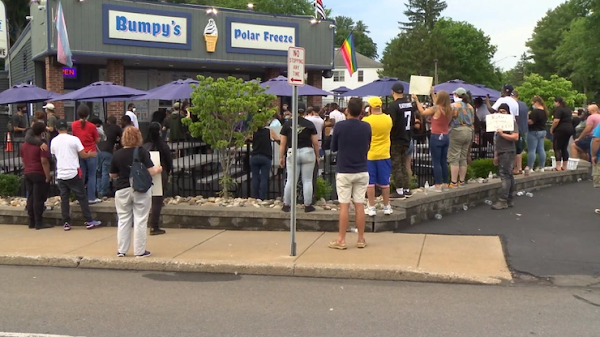 A former ice cream shop owner accused of calling police on peaceful Black Lives Matters protesters was ordered Wednesday to pay them $500 each by a judge for violating their civil rights.

Attorney General Letitia James’ lawsuit against the former owner of Bumpy’s Polar Freeze in Schenectady was the first to rely in part on a new state law targeting false, race-based police reports.

The suit alleged that David Elmendorf wielded a baton and air rifle and shouted racial epithets at protesters who came to his business to protest after racist text messages he allegedly wrote circulated on social media.

Elmendorf also was accused of calling 911 to falsely report that armed protesters were threatening to shoot him, referring to Black protesters as “savages.”

The lawsuit accused Elmendorf of violating demonstrators’ rights to peacefully protest by threatening and harassing them.

It also cited a civil statute passed last year following the high-profile case against a white woman who called 911 on a Black birdwatcher in New York’s Central Park and falsely claimed he was threatening her.

Under the ruling, Elmendorf must pay $500 each to nine protesters he harassed, for a total of $4,500. He is permanently barred from making future threats against people because of their race and from brandishing a deadly weapon within 1,000 feet of any peaceful protest.

“There is zero tolerance for harassment, intimidation, or violence of any kind against anyone in New York,” James said in a prepared release.