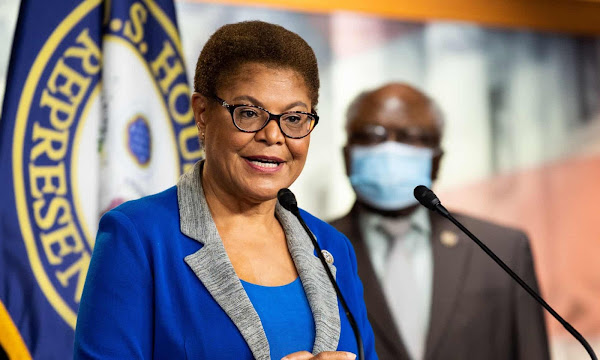 Responding to favorable polling numbers and encouragement from supporters, Rep. Karen Bass said she is "seriously considering" running for mayor of Los Angeles in 2022.

A poll released on Aug. 23 by a California-based public opinion research firm found that more than a quarter of a sample of the city's Democrats supported Bass against other current and potential candidates for the 2022 mayoral election.

In an interview with KPCC/LAist, Bass said, "I have been overwhelmed and humbled by people pushing for me to do this, and I will say that I am seriously considering it."

She said that running for mayor "was not something I had thought about before -- I was planning to run for reelection. I am evaluating the situation now."

There’s evidence that Bass would enter the campaign as a frontrunner. A survey by opinion firm FM3 Research that asked Democratic voters about current and potential candidates found strong support for Bass — nearly a quarter of respondents picked her as their first choice for mayor. Bass' hypothetical competitors languished in the single digits, according to the results of the late-July early-August snapshot.