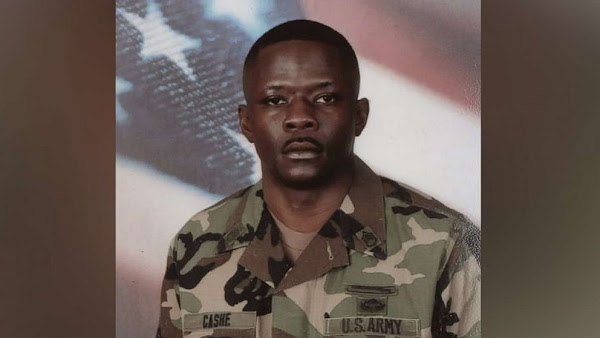 President Joe Biden on Thursday awarded the Medal of Honor -- the nation's highest military award for valor -- to three U.S. soldiers for risking their lives "above and beyond the call of duty" during the wars in Afghanistan and Iraq, including Sgt. 1st Class Alwyn Cashe, the first Black service member to be so honored since the 9/11 attacks.

"Today, we honor three outstanding soldiers, whose actions embody the highest ideals of selfless service," Biden said at the ceremony. "We also remember the high price our military members and their families are willing to pay on behalf of our nation."

Cashe suffered fatal injuries while serving in Iraq on Oct. 17, 2005, after rescuing fellow soldiers from a burning vehicle during Operation Iraqi Freedom in the Salah Ad Din Province, according to the White House.

Cashe died 16 years ago at the age of 35 and his widow, Tamara Cashe, accepted the posthumous award on his behalf during a White House ceremony.

Cashe grew up in Oviedo, Florida, and enlisted in the U.S. Army in July 1989 after graduating from Oviedo High School. He was deployed in the 1991 Gulf War and served in Korea and Germany before being deployed to Iraq in 2005 while serving as a platoon sergeant in the 3rd Brigade, 3rd Infantry Division at Fort Benning, Georgia.

Cashe was initially awarded the Silver Star, the Army's third-highest honor for valor in combat, but his battalion commander, Lt. Gen. Gary Brito, and other officers advocated for years that Cashe deserved to be upgraded for the Medal of Honor. Cashe-White said that Brito and the 3rd Infantry Division had "been with us every step of the way."

When the vehicle that Cashe was commanding became engulfed in flames during an attack, his uniform caught fire and he sustained severe burns while extinguishing the flames and rescuing his fellow soldiers, according to the White House. Even after suffering injuries, he repeatedly approached the vehicle and helped four soldiers escape while being targeted by live fire.

"He went back into the inferno for a third time and got everyone out of that inferno," Biden said at Thursday's ceremony. "That was his code; his love for his Third Infantry Division ran deep. No soldier was going to be left behind on his watch."