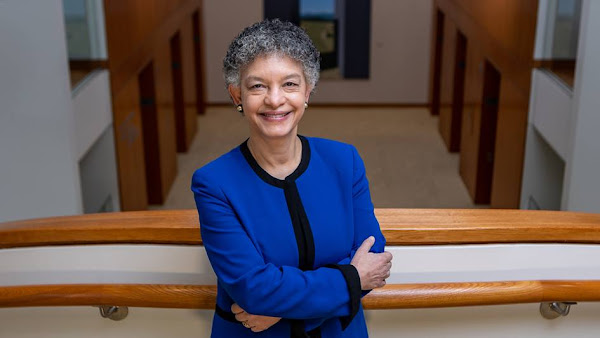 The Federal Reserve Bank of Boston announced that Dr. Susan M. Collins will be its next president, CEO, and participant in national monetary policymaking on the Federal Open Market Committee.

Collins currently is provost and executive vice president for academic affairs at the University of Michigan – a role the university asked her to take on in 2020. She is also the Edward M. Gramlich Collegiate Professor of Public Policy and Professor of Economics.

As provost, Collins is the University of Michigan's chief academic and budget officer, responsible for overseeing all academic programming and budget planning and aligning administrative and support functions to advance the university's mission. Previously, she was a professor – and for a decade was the Joan and Sanford Weill Dean – at the university's Gerald R. Ford School of Public Policy.

Collins is an international macroeconomist with a lifelong interest in policy and its impact on living standards. She has published widely and served as a provost, dean, professor, research scholar, and board member at a variety of organizations.

The announcement follows a rigorous search, selection by the eligible (non-banker) members of the Bank's Board of Directors, and approval by the Washington-based Board of Governors of the Federal Reserve System.

"After an intensive search, we are thrilled to appoint this exceptionally well-qualified person to be the Bank's president and a key leader in the Federal Reserve System," said Dr. Christina Paxson, president of Brown University and chair of the Bank's Board of Directors, who also led the Presidential Search Committee.

"Dr. Collins brings the technical expertise and insight to contribute to policymaking and the leadership ability to head the organization," Paxson said. "She is deeply committed to serving the public, engaging with constituents, and advancing economic stability, opportunity, and prosperity for the region and nation through the work of the central bank. Susan has also advanced diversity, equity, and inclusion through her work with the American Economic Association, the Ford School, and the University of Michigan."

"It is an honor and an inspiration to serve as the Boston Fed's next president," Collins said. "Throughout my career, I have been driven by a commitment to leveraging research, education, and public service to improve lives. I look forward to helping the Bank and System pursue the Fed's dual mandate from Congress – achieving price stability and maximum employment."

"I am also inspired by the portfolio of important and innovative work underway at the Boston Fed," Collins said. "I am delighted with the opportunity to lead such a dynamic organization, engage with its talented staff, and work with its constituents – to understand their economic challenges and help explain the work of the Fed in the economy. It will also be a pleasure to return to Greater Boston and New England."

"We are very pleased that Dr. Collins will be leading our organization," said Kenneth Montgomery, interim president and CEO of the Boston Fed and the Bank's first vice president. "She is a leader with exceptional background and perspective. She also has a deep understanding of the Federal Reserve System's inner workings, having served for nine years as a director at the Chicago Reserve Bank. I am excited to work with Susan here in Boston, and I know she will help us build on our Bank's distinctive contributions."

Collins will assume the Bank's presidency on July 1, following the completion of the academic year at the University of Michigan. Montgomery will remain the Bank's interim president until then and will continue as first vice president and chief operating officer. He assumed the interim president role last fall when former president Eric Rosengren retired following 35 years of service to the Bank (14 as president). Montgomery will also continue leading the Federal Reserve System's FedNowSM Service, which will support instant payments for businesses and individuals.

In addition to positions held in the Boston area, Washington, and Michigan, Collins has a broad range of professional affiliations and engagements. She is currently a member of the board (and executive committee) of the Cambridge, Massachusetts, based National Bureau of Economic Research, where she has been involved in research since 1984. She is a member of the board of the Peterson Institute for International Economics and a nonresident senior fellow at the Brookings Institution. She will step down from these positions before taking office. She is also a member of the Council on Foreign Relations and the Aspen Economic Strategy Group.

Collins has served multiple times as a moderator at the Jackson Hole symposium hosted by the Kansas City Reserve Bank. And from 2006 to 2009, she served as an elected member of the American Economic Association's executive committee. Earlier, she had been a member and then chair of the American Economic Association's Committee on the Status of Minority Groups in the Economics Profession. More details on her professional affiliations can be found in her biography.

Collins grew up in New York City to Jamaican parents and became a U.S. citizen in 1997. She is married to Dr. Donald R. Vereen, Jr., M.D., M.P.H., who trained at Harvard and Tufts Universities and at Boston-area medical institutions. They have two adult children.

Her published research has focused on the determinants of economic growth, exchange rate regimes and economic performance, the implications of global integration for U.S. labor markets, persistent macroeconomic imbalances, and countries' economic transformations.

Given the established rotation of Reserve Banks, in 2022 Collins will be a voting member of the Federal Open Market Committee after taking office. As president, she will oversee the Bank's responsibilities in monitoring local economic conditions to aid in the formulation of monetary policy, engaging in outreach to promote economic growth and community revitalization, supervising banks and bank holding companies, and providing financial services to facilitate banking operations.

Collins will fulfill the remainder of the current five-year term that commenced on March 1, 2021, and ends on February 28, 2026 – a juncture at which she, like all Reserve Bank presidents, will be considered for reappointment via a rigorous and comprehensive process overseen by the Board of Governors.

Reserve Bank presidents are subject to mandatory retirement considerations. Presidents initially appointed after age 55 are eligible to serve up to 10 years in office.