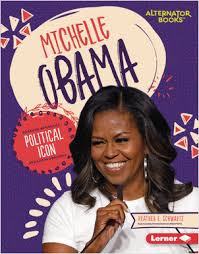 A parent in Texas called for a children's biography about former first lady Michelle Obama to be pulled from school libraries because they viewed it as unfair to former President Donald Trump.

The Katy, Texas, parent took issue with a book titled "Michelle Obama: Political Icon" by Heather E. Schwartz, saying it "unfairly" depicted Trump "as a bully," according to NBC News, which on Wednesday published a list of 50 books that parents in Texas have asked schools to remove.

The parent in Katy, who was not named in NBC's report, said the book about Obama gave the impression that "if you sound like a white girl you should be ashamed of yourself," NBC News reported.

Maria Corrales DiPetta, a spokesperson for the Katy Independent School District, told Insider the district reviewed the book after the complaint and determined it would not be removed. Any book that is challenged is reviewed by the district, even if only one parent submits a complaint, she said.

Check out the book here
Posted by Councilman George L. Cook III at 7:44 AM