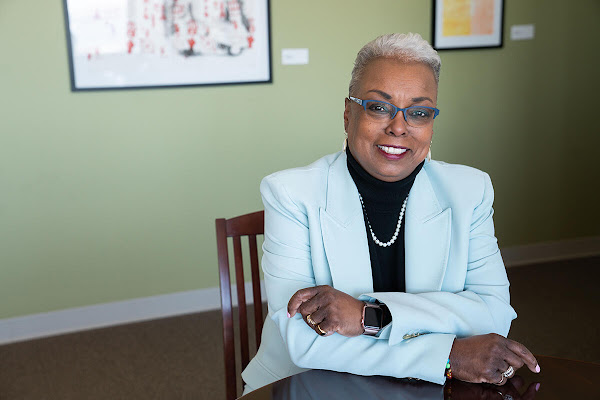 The Ithaca College Board of Trustees has voted unanimously to name Dr. La Jerne Terry Cornish as the 10th president of Ithaca College. Cornish, who had been serving as interim president since August 30, 2021, begins her new status as president immediately.

In an announcement to the campus community, Ithaca College Board of Trustees Chair David H. Lissy ’87 said that Cornish has the character, the fortitude, and the passion to lead the institution at this important, transformational moment.

“Her appointment ensures a seamless transition and unimpeded progress in advancing the college’s vision, mission, and values,” said Lissy. “Building on the foundation and the momentum of the Ithaca Forever strategic plan, Dr. Cornish represents a new era of leadership for the college. She has a thorough grasp of the challenges before us and is ready to work collaboratively with the members of the IC community on campus and around the world to ensure that we lean into the significant opportunities that we have to secure a bright future for Ithaca College. The board has the utmost confidence in her ability to unite the college community and in her desire to lead in the pursuit of excellence.”

“I feel honored and blessed to have been chosen as the 10th president of Ithaca College, and I wish to thank the Board of Trustees, the Presidential Search Committee, and our Ithaca College community for your trust in my leadership,” Cornish said. “This is a time of challenge but also of opportunity for the college. Together—with our commitment to the IC student experience firmly centered as our guide—we will move our college ever forward as we work to realize our vision to become a global destination for bold thinkers seeking to build thriving communities.”

Lissy thanked the Presidential Search Committee for its diligence in conducting a thorough and comprehensive five-month national search. The committee membership included the elected leaders of the college’s Faculty, Staff, and Student Governance Councils and Alumni Association Board of Directors, as well as two additional faculty members and eight trustees. Ten of the committee’s 15 members are alumni of Ithaca College.

“Their collective work produced a deep and diverse pool of viable candidates,” said Lissy. “Through this highly competitive process, performed with the utmost attention to the current and future needs of the campus, the search committee unanimously recommended to the board that Dr. Cornish be named IC’s next president.”

Board of Trustees member and search committee chair David Fleisher ’91 said that, in the final analysis, Cornish rose to the top of the list.

“Her professional experience, leadership skills, personal qualities, and demonstrated track record of persevering through difficult times elevated her above the other very accomplished candidates,” said Fleisher.

Cornish holds a doctorate in language, literacy, and culture from the University of Maryland, Baltimore County; a master of education degree with a concentration in urban and diverse learners from Goucher College; and a bachelor’s degree in English, also from Goucher.

Prior to joining Ithaca College, Cornish taught at Goucher and served from 2014-18 as associate provost for undergraduate studies. She was Goucher’s first African American alumna to be awarded tenure and the first African American to serve as both chair of the faculty and associate provost for undergraduate studies. For those achievements, among others, she was honored with the Goucher Distinguished Alumnae/i Award in 2016.

She has been a member of Alpha Kappa Alpha Sorority, Incorporated, the first intercollegiate historically African American sorority, since 1984.