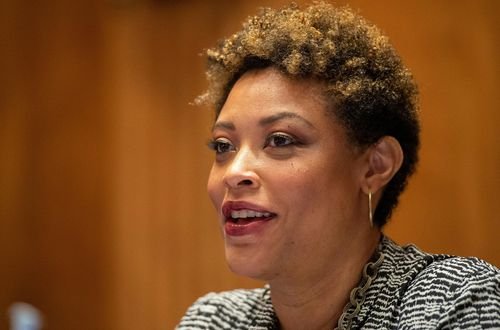 Shalanda Young on Tuesday became the first Black woman to lead the White House budget office after the Senate confirmed her to the Cabinet-level position with bipartisan support. The vote was 61-36.

Young has served as acting director of the Office of Management and Budget for the past year. She was confirmed last March by the Senate to serve as the deputy director and ascended to the top role after Neera Tanden's nomination was withdrawn because Tanden didn't have enough support in the Senate. Nearly nine months after Tanden's nomination was withdrawn, Biden officially nominated Young as director.

Young was the first Black woman to serve as the staff director of the House Appropriations Committee and won bipartisan praise for her work in that role. She worked on the committee for more than 14 years and took over as staff director in 2017.

The key office, which oversees all budget development and execution and has significant influence over the President's agenda, has been without a Senate-confirmed leader since the President took office last January. It was the last Cabinet-level position that remained unfilled.