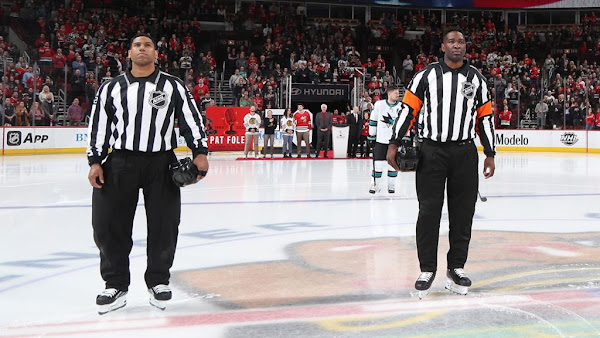 Two Black on-ice officials worked a game together for the first time in NHL history Thursday.

"It was a lot of fun," Samuels-Thomas said. "Growing up all you want to do is be in the NHL, and I'm 31 years old and it's been a lifetime of work and I had all my family here in the stands and friends and everyone who's been with me along the way. So, special to share the moment with them."

Samuels-Thomas wore No. 42, which was worn by Jackie Robinson, who broke Major League Baseball's color barrier April 15, 1947, with the Brooklyn Dodgers.

"When I played I was No. 42 for a reason, and with the opportunity to wear this number [it] was easy," Samuels-Thomas said. "… Being able to wear Jackie's number is always special, so I got to do it as a player and now as an official. I wish I could keep this number forever."

"He did a great job," Alphonso said. "Official supervision, I think he nailed it. He took what was given to him out there and I thought he did a good job and kept his composure out there the whole game. It was a lot of fun, for sure."

"I think it's just an exciting moment in NHL history," Sharrers said Thursday. "Just showing how the game has changed from the amount of Black players and players of different ethnic backgrounds who are now in the League, I think it's an exciting moment and it's nice to see our team now have that kind of representation."