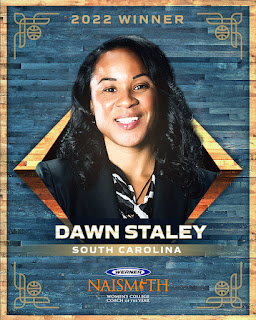 South Carolina’s Dawn Staley has been named the Werner Ladder Naismith Women’s Coach of the Year.

“Dawn’s remarkable leadership is evident in how South Carolina has performed throughout the season culminating with a conference championship, top-tier national ranking and a chance to win the national championship still ahead,” said Eric Oberman, executive director of the Atlanta Tipoff Club. “Truly a remarkable season for both and wonderful representatives of the Naismith Awards.”

Staley is now a two-time recipient of the coaching award, earning the honor in 2020 when she became the first-ever head coach in either men’s or women’s college basketball to win the Naismith Coach of the Year award after previously winning the Naismith Player of the Year (Virginia, 1991, 1992). She edged out Wes Moore (NC State), Kim Mulkey (LSU) and Tara VanDerveer (Stanford). Named SEC Coach of the Year for the fifth time in her career, Staley led South Carolina to an undefeated 12-0 record versus AP-ranked opponents, an SEC regular-season title and a Final Four appearance for the fourth time in the last seven NCAA Tournaments. For the first time in program history, the Gamecocks were ranked No. 1 in the AP Poll for the entire season.

“Werner is proud of its association with the Atlanta Tipoff Club and honoring the most outstanding coaches in college basketball, and we salute all the women’s finalists for leading their teams to exceptional seasons,” said Stacy Gardella, head of Global Marketing Technology & Operations at WernerCo. “It is an honor to recognize Dawn Staley, as her leadership and positive impact on the lives of the student-athletes she coaches make her incredibly deserving of this year’s Werner Ladder Naismith Women’s Coach of the Year award.”

“Any time you win an award like this, it goes to one individual, but it really does take a village,” Staley said. “I’d be remiss if I didn’t mention our coaches, staff, administrators and all our players. Their commitment allows us to be recognized this way. I think God gives us an opportunity to play this game we love and to represent it the way that we do. On behalf of our entire team, I want to thank the Naismith Awards and Werner Ladder for this honor.”