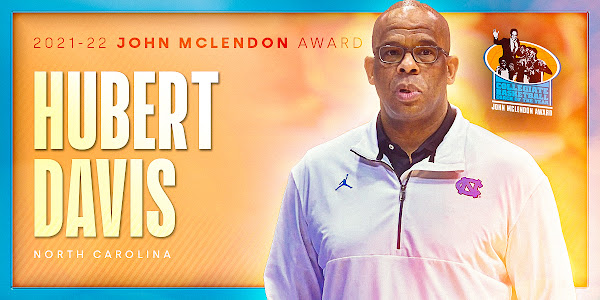 University North Carolina coach Hubert Davis is the recipient of the 2021 John McLendon Award, which is presented annually to the top collegiate head basketball coach and includes Division I, Division II, Division III, NAIA and NJCAA.

In his first season as the Tar Heels’ head coach, Davis orchestrated a remarkable turnaround and led the team to 28 victories and the Final Four.

Davis, 51, starred at UNC as a player, graduating as the program’s all-time leader in 3-point percentage. After a 12-year NBA career, he worked as a college basketball analyst at ESPN before joining Roy Williams staff at UNC in 2012. He was tabbed to replace the Hall of Fame coach when Williams retired following the 2020-21 season.

UNC struggled early in Davis’ debut season, suffering blowout losses to Tennessee, Kentucky, Duke and Miami and was 12-6 overall and 4-3 in the ACC in late January. But the Tar Heels won 16 of the next 19, spoiled Coach K’s final home game at Duke and advanced to the Final Four for the 21st time, extending their record. The Tar Heels’ success mirrored the in-season development of guards R.J. Davis and Caleb Love.

The John McLendon Award is named after one of the true legends of the sport. A trailblazer and one of the true pioneers of the game, McLendon became the first African American coach to win an integrated national championship. His team went on to win the NAIA Division I Men's Tournament in 1957, 1958 and 1959, making him the first coach in history to win three consecutive NAIA championships.

In 1969, McLendon was hired by the Denver Rockets and became the first African American head coach in the American Basketball Association. After a brief stint with the Rockets, McLendon ended his 25-year professional coaching career with a winning percentage of .760 and a lifetime career average of 523 victories and 165 losses.