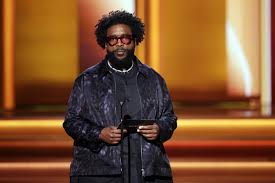 A week after winning an Oscar, Questlove took home a a Grammy Award.

He won for best music film for Summer of Soul (… Or, When the Revolution Could Not Be Televised), his documentary about the 1969 Harlem Cultural Festival, which also won best documentary at the Oscars last week.

“What a journey for this film … since Sundance all the way until last week,” he said with a laugh. “It just hit me that we haven’t really given much spotlight to what matters in the film — the beautiful artists who performed there.” He then proceeded to name all of the performers.

Posted by Councilman George L. Cook III at 6:32 AM