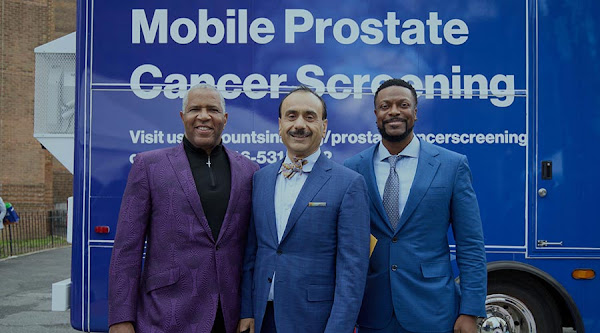 Another tragic fact is that Black men are at a much higher risk of developing this disease and eventually dying from it compared to white men. To address this issue affecting the Black community, Smith donated $3.8 million to Mount Sinai for the official launch of the Robert F. Smith Mobile MRI Unit to support prostate health awareness. This community effort will help provide increased education, awareness, and early detection screening to Black men across New York City’s greater neighborhoods of color to prevent prostate cancer from progressing further.

Black men are 1.7 times more likely to be diagnosed with prostate cancer and 2.1 times more likely to die from prostate cancer than white men. While a clear reason for these substantial differences can’t be exactly defined, a variety of different factors could be contributing to the inequity. In the United States, Black Americans can be at a disadvantage when it comes to receiving the necessary preventative care needed for health concerns making them at-risk for diseases such as prostate cancer. With increased care and awareness, the racial divide for prostate cancer in men is narrowing. Early detection of this hard-hitting disease is crucial to increasing survivability. That’s why Smith has partnered with Mount Sinai to offer prostate health screenings for the Black community.

The new Robert F. Smith Mobile MRI Unit will bring prostate cancer screening directly to Black men in the communities of Central, Eastern, and West Harlem; the Upper East Side; and Queens. These communities of color are at a higher risk of developing prostate cancer and dying from it than white communities. That’s why it’s crucial to have tools such as the Mobile MRI Unit in place for early detection and prevention of this disease.

This state-of-the-art mobile facility will provide the necessary tools for advanced screening for prostate cancer by trained medical professionals. Through this community outreach program, the Mount Sinai Health Center hopes to:

Raise awareness about prostate cancer and the screening services offered by the Mobile MRI Unit.

Schedule follow-up visits for patients with urologists at the Mount Sinai Center of Excellence for Prostate Cancer.

The Mobile MRI Unit will be able to bring this technology and testing straight to the Black communities of Harlem and beyond. Access to an MRI can be life changing and aids in early detection of this disease in Black Americans. If abnormally high PSA levels are detected, Mount Sinai will develop a treatment plan for the patient which will include follow-up visits at Mount Sinai’s Center of Excellence for Prostate Cancer.