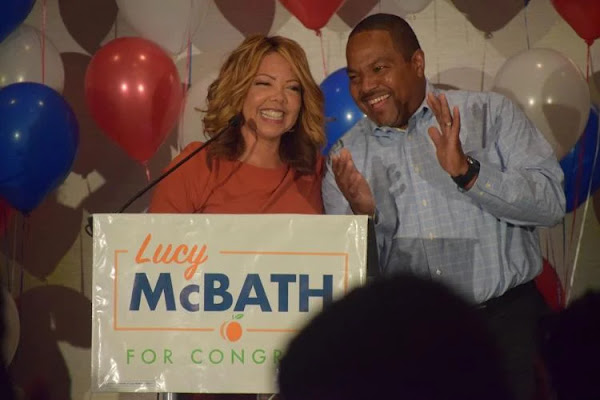 "This night isn't the end of an election," McBath told supporters gathered in a ballroom at the Hilton Atlanta NE in Peachtree Corners. "Tonight, we are not at the end of the challenge, but we are actually on the face of a mountain, one arm ahead to pull ourselves up. The other stretched back to embrace those who feel forgotten or left behind.

"America has always been defined by the challenges that we face and we face a grave one tonight. We can be a nation where the many who do not look like us, think like us or worship or act like us are simply one nation, so, tonight, I stand before you as Lucy McBath, a daughter of the Civil Rights movement, a woman who survived breast cancer twice and a mother who lost her son to gun violence."

McBath face the winner of the Republican primary, which appears be headed to a runoff between Mike Corbin and Mark Gonsalves.

Posted by Councilman George L. Cook III at 7:21 AM