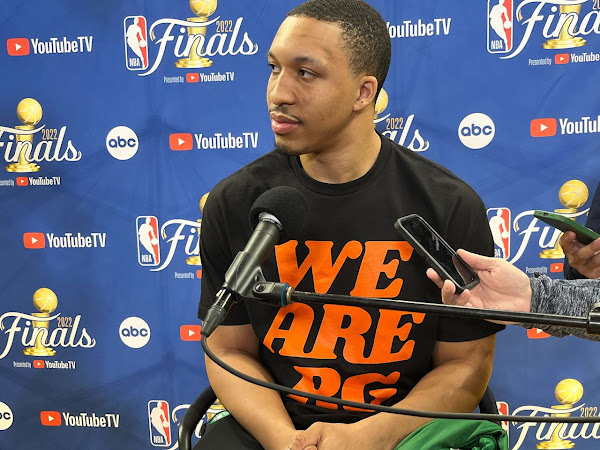 Members of the Boston Celtics wore T-shirts with "WE ARE BG" written across them at Saturday's practice ahead of Game 2 of the NBA Finals in support of WNBA superstar Brittney Griner, who remains detained in Russia.

"The shirts were super important not only showing our support for our sister that is detained over in Russia, Brittney Griner, we just wanted to show that togetherness and love that we have throughout not only the NBA but the WNBA," Grant Williams said. "She's been a vital part of the WNBA over years past, college, and in the amount of impact she's had on young female athletes, USA and overseas.

"We hope to have her back in the U.S. and reunited with her family and do what she loves and bring that love and tenacity she always plays with on the court."

Williams, a vice president within the National Basketball Players Association, said the shirts were a collaboration between both the NBPA and WNBPA, as a way to show support for Griner as she continues to be held in Russia, where she's been in custody since early February.

"They sent them overnight to get them here for today," Williams said. "They did a phenomenal job, and want to credit them to make that process happen. We just wanted to do that as a team. It was one of those things where no one questioned it. Everyone said, 'Let's do it.' Everyone put the shirt on immediately when we got them, fresh off the box. They were ironed and good to go. So we wanted to show that love and support."

The 6-foot-9 center has been in custody since being detained at an airport in mid-February, with the United States government saying Griner has been wrongfully detained.

"We wanted to come out and show our support... We feel like enough is enough."