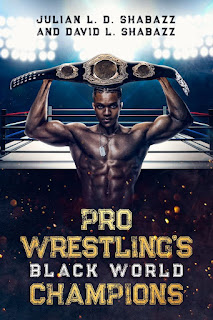 A new book entitled, “Pro Wrestling’s Black World Champions”, is co-authored by the late Julian L.D. Shabazz, historian and leading authority on the history of African-American wrestlers, and his brother professor and scholar David L. Shabazz.

The book profiles the African American wrestlers who have held the world heavyweight championship in one of the major wrestling companies. The title holders profiled range from Bearcat Wright and Ernie Ladd to The Rock, Booker T, and Jackie Moore.

In addition, it also profiles the heavyweight champions from the days of the National Wrestling Alliance (NWA) and World Championship Wrestling (WCW) to the current World Wrestling Entertainment (WWE) and All Elite Wrestling (AEW).

Pro Wrestling’s Black World Champions offers insight into their careers, background, and signature moves and slogans that propelled each wrestler to the top of their respective federation.

The book is available now on Amazon and all bookstores across the United States.