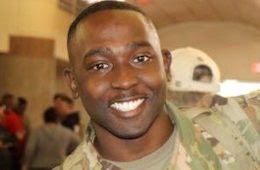 An off-duty Army serviceman is being celebrated as a hero after he saved the lives of several children during Saturday’s deadly mass shooting in El Paso, Texas, but the soldier says he doesn't want the world to focus on him.

"What I did was exactly what I was supposed to do. I understand it was heroic and I'm looked at as a hero for it, but that wasn't the reason for me," U.S. Army soldier Glendon Oakley said Sunday, before breaking down in tears. "I'm just focused on the kids that I could not [save] and the families. It hurts me. I feel like they were a part of me. I don't even know the people that died or the kids that I took with me."

Hear more from this American hero below.

Posted by Councilman George L. Cook III at 3:46 AM No comments: