[ SOURCE ] Yahoo Sports reports that former Laker and Hall-of-Famer Magic Johnson is interested in purchasing the Los Angeles Clippers from Donald Sterling in the wake of the alleged racist comments from Sterling that broke into a firestorm of scandal this weekend. 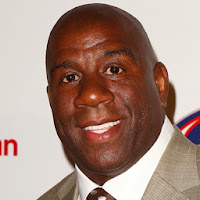 To bail themselves out of the NBA's worst crisis of credibility since the Tim Donaghy officiating scandal, the easy part for the NBA will be enlisting the eagerness and financial muscle of Magic Johnson and Mark Walter of the Guggenheim Partners – owners of the Los Angeles Dodgers.

Make no mistake: Magic's Dodgers group is angling for a Southern California sports empire. Magic Johnson and Guggenheim had been aggressive in pursuing a purchase of the Los Angeles Lakers – only to have the Buss family make clear to them the franchise isn't for sale, sources told Yahoo Sports.

"This is 100 percent Magic's plan," a league official intimately involved in the buying and selling of franchises told Yahoo Sports.