Black people don't need Al Sharpton to tell them to get angry. 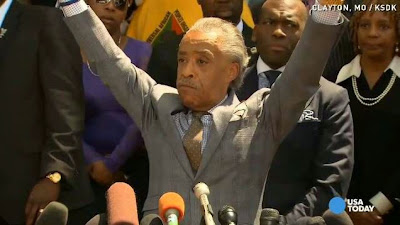 Whenever there is a tragic shooting of a young black man Al Sharpton inevitably shows up. Some conservatives instantly criticize him and say he is a race baiter, publicity hound, or camera chaser. They make these comments of the fact that most times Sharpton is actually asked by the families of the victims to come in as in the Michael Brown situation.They make this statements as if African Americans are incapable of getting angry unless told to do so by black leaders like Sharpton.

But it astounds me when I here talking heads say that the Al Sharptons and Jesse Jacksons of the world only make the situation worse and inflame passions.

They must think that black people just hold their anger in until Sharpton gets there and after a few choice words from him then decide to get angry. Any black parent would and should be mad at the shooting of Michael Brown. That could have been their child or grandchild. Their brother or father that was shot down and then left to lay in the street for hours. The police didn't have the common decency to place a sheet over the body. The police then continued to change their stories about what has happened and then showed up in military gear and with military vehicles. Wouldn't that make any normal person angry? Would anyone need Sharpton to show up and say "Okay let's get mad!"

We as a community know on our when an injustice has been committed. We don't need anyone to tell us to get angry. I think the reason that some hate Al Sharpton is that because when he comes so do the cameras and all that BS they have been getting away with is now in full public view. Say what you will about the man but he brings attention to a situation like few others.

If Sharpton haters really want to see him put out of business all they have to do is fight for justice for all. They would make sure that police are actually held to a higher standard and demand accountability from them. When there is that justice and accountability there will be no need for the Al Sharptons of the world. Until then...