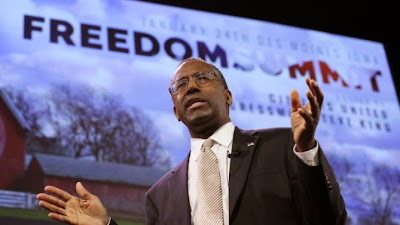 Dr Ben Carson addressed the Iowa Freedom Summit Saturday. He spoke on Obamacare, the right to life, economy, foreign policy and more. What he did best was prove that he has no business running for president let alone being president. Carson spoke in generalities and showed little to no substance. He gave the crowd the usual conservative talking points to get cheap applause and nothing more. In the twenty or so minutes ( Yes, twenty minutes of his nasally voice, my ears are still bleeding) are so that he spoke we learned nothing about how he would actually implement any of his ideas. To be fair he never does say talk on the how to part of things. Watch his speech below: