Rosa Parks' archive opening to public at Library of Congress 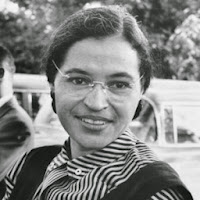 [SOURCE] Rosa Parks, who refused to give up her seat on a segregated bus, reflected later on how it felt to be treated less than equal and once feistily wrote of how tired she was of being "pushed around" — parts of her history long hidden away.

Beginning Wednesday at the Library of Congress, researchers and the public will have full access to Parks' archive of letters, writings, personal notes and photographs for the first time. The collection will provide what experts call a more complex view of a woman long recalled in history for one iconic image — that of a nonviolent seamstress who inspired others to act at the dawning of the civil rights era.

A protracted legal battle between her heirs and friends had kept the collection from public view for years. But in 2014, philanthropist Howard Buffett bought the collection and placed it on long-term loan at the national library.

"I think it's one of the first times we're actually able to read her voice, and it just totally goes against this image of the quiet seamstress," said Margaret McAleer, an archivist at the library. "Her writings are phenomenally powerful."

"I had been pushed around all my life and felt at this moment that I couldn't take it anymore," she wrote. "When I asked the policeman why we had to be pushed around, he said he didn't know. 'The law is the law. You are under arrest.' I didn't resist."

Parks' archive provides scholars and the public with a fuller sense of her life and faith, her personality and her pain, said library historian Adrienne Cannon.

"It's important because we see Rosa Parks in a kind of almost frozen, iconic image — a hero that is not really real flesh and blood," Cannon said. "Here we get a sense of a woman that is really full flesh and blood."

The collection may surprise people by revealing Parks had an aggressive edge and supported more radical actions seeking equality over the years, archivists said. She used her symbolic status to support Malcolm X, Black Panther gatherings and the Wilmington 10 in North Carolina.

The library now holds about 7,500 manuscript items and 2,500 photographs from Parks, including the Bible she kept in her pocket, letters from admirers and her Presidential Medal of Freedom. A small exhibit is planned for March. All the items will be digitized and posted online.

Artifacts such as Parks' clothing, furniture and a pillbox hat she may have worn on the Montgomery bus, will find homes elsewhere. The library plans to place them with other museums or institutions that can conserve and display Parks' belongings. The library already is in talks with the Smithsonian's National Museum of African-American History and Culture, now under construction on the National Mall, to possibly house some items.

Posted by Councilman George L. Cook III at 6:04 AM