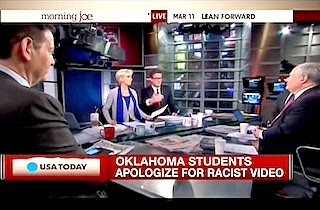 Here's one from the that didn't take long, but not as soon as we expected file. On MSNBC's (yes, that channel still exist) the host and guest pinned some of the blame for SAE's racist rant on Hip Hop. They discussed this idea because of the lyrics of Wocka Flocka Flame (apparently he still exist also), who in protest has cancelled a performance for the fraternity. I actually expected someone to make this charge but I would have bet $100 it would have came from Fox News or conservative radio. Watch the video excerpt below: