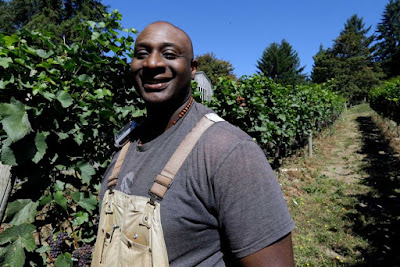 Bertony Faustin didn't set out to be Oregon's first black winemaker. He just wanted to make good wine. But the disbelief that often comes when customers realize a black man owns the winery has worn on him. "People are always surprised. Everybody assumes that ... I am not the winemaker," said the 43-year-old, who four years ago opened Abbey Creek Winery about 20 miles northwest of Portland. "The image of the winemaker is an old white guy. To see that it's a black man, it takes people aback."

The industry's stereotype, Faustin said, is one of status and racial homogeneity — photographs in wine publications feature manicured homes, expensive tasting rooms and white families touting well-bred pedigrees. Yet, more African-Americans and other minorities are increasingly making and drinking fine wine and wine-tasting clubs for African -Americans have proliferated. The shift, many experts say, is making the industry less elitist and attracting a diversity of customers, but comes with its own challenges.