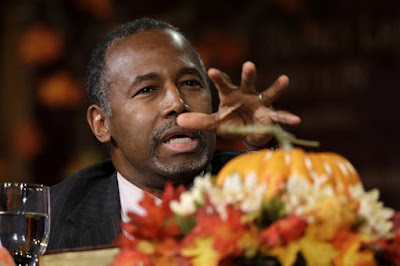 Wow, here is another example of Ben Carson showing he does not get it. He is spreading the fallacy of how black men carry themselves has anything to do with how police treat them. Whether dressed in a business suit or a sweat suit, if you're a high school dropout or have a PHD you will still be treated the same by some police officers. SMH! George Cook AfricanAmericanReports.com.

Republican presidential candidate Ben Carson told a group of African-American civic leaders on Saturday that he is still waiting to see evidence of racial bias by law enforcement agencies in the U.S.

The only major White House hopeful who is black, Carson also mused during a criminal justice forum that he never had problems with police as a young black male in Detroit "because I was taught by my mother to be very respectful of authority."

Carson later demurred when pressed on whether he could offer examples of "institutional racism" in America. "It probably exists somewhere," he said. "If it exists, expose it. ... That's your best defense."