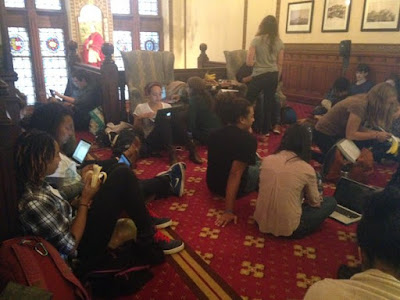 Georgetown students began a sit-in Friday outside University President John DeGioia’s office, calling for him to change the name of Mulledy Hall, a newly reopened dormitory named for a former university president and slaveholder.

Between 20 and 40 students arrived outside the office at 9 a.m. and intend to stay until the building closes at midnight, returning again Saturday morning.

A group of the demonstrators met with DeGioia within an hour of beginning the sit-in, but plan to continue until the building’s name is changed, according to posts on the event’s Facebook page by organizers.

The sit-in was announced at a solidarity demonstration on Thursday, during which students spoke about their experiences as racial minorities on campus and called for a list of six demands to be fulfilled, including changing the names of three buildings, developing an endowment to hire more black faculty and staff and instituting programs and plaques on campus to recognize the role of African Americans in the University’s history.

A Working Group on Slavery, Memory and Reconciliation, which was convened earlier this year in response to backlash toward the building’s name, met with DeGioia to discuss the protesters’ demands. As of 2:45 p.m., no public statements had been made, and demonstrators have declined to comment.

Posted by Councilman George L. Cook III at 8:56 AM