Online threats against blacks lead to arrest at Missouri campus 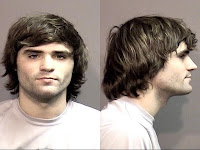 A white college student suspected of posting online threats to shoot black students and faculty at the University of Missouri was charged Wednesday with making a terrorist threat, adding to the racial tension at the heart of the protests that led two top administrators to resign earlier this week.

Hunter M. Park, a 19-year-old sophomore studying computer science at a sister campus in Rolla, was arrested shortly before 2 a.m. at a residence hall, authorities said. The school said no weapons were found. Boone County prosecutors announced the criminal charge later Wednesday and recommended that he be held without bond.

The author of the posts, which showed up Tuesday on the anonymous location-based messaging app YikYak and other social media, threatened to "shoot every black person I see." The posts followed the resignations on Monday of the University of Missouri system president and the chancellor of its flagship campus in Columbia.

Another threat said: "Some of you are alright. Don't go to campus tomorrow." The message seemed to echo one that appeared on the website 4chan — a forum where racist and misogynistic comments are common — ahead of the deadly campus shooting at an Oregon community college last month.