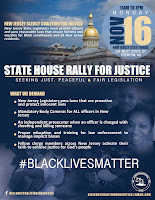 On Monday, November 16, 2015, from 11am to 1pm, the New Jersey Clergy Coalition for Justice (NJCCJ) will host a "State House Rally for Justice" at the New Jersey State House, 125 West State St., Trenton, NJ. The rally will focus on the following reforms: mandatory body cameras for ALL officers in New Jersey, an independent prosecutor when an officer is charged with shooting and killing someone, and proper education and training for law enforcement to manage implicit biases. The New Jersey State Legislators must protect citizens and pass reasonable laws that ensure fairness and equality for Black constituents and all New Jersey residents because the public's trust in Police Officers has been broken.

We will gather together under the creed, "Black Lives Matter." Black Lives Matter is a creed because, from the perspective of the long history of racism in the United States (slavery, segregation, racial profiling, mass incarceration etc...), the statement Black Lives Matter is a thing of faith and not fact. We will gather at the State House not in response to a "Call to arms," but rather, to affirm a "Call to lay down arms" in the name of justice and in the name of those who, if given the opportunity, would perhaps prefer to be behind bars instead of in a coffin.

We will gather in support of legislation that mandates body cameras for all officers in New Jersey. “'Knowledge that events are being recorded creates ‘self-awareness’ in all participants during police interactions,' said University of Cambridge officials in a statement on the study. 'This is the critical component that turns body-worn video into a ‘preventative treatment.'” Self-awareness leads to peace, not only internal peace, but external peace between officer and civilian which can result in more civil interactions between officer and civilian, less complaints against officers with a history of accusations of excessive force, and a decline of the use of lethal force by police officers.

We will gather in support of legislation that calls for an independent prosecutor when an officer is charged with shooting and killing someone. "'It’s very difficult to ask prosecutors who depend on police every day to be the ones to arrest and prosecute police,' says Erwin Chemerinsky, dean of the University of California at Irvine School of Law.'" According to President Obama's Task Forces on 21st Century Policing, "The task force encourages policies that mandate the use of external and independent prosecutors in cases of police use of force resulting in death, officer-involved shootings resulting in injury or death, or in-custody deaths."

We will gather in support of proper education and training for law enforcement to manage implicit biases. According to the director of the Federal Bureau of Investigation in a speech given at Georgetown University, James B. Comey, "Much research points to the widespread existence of unconscious bias. Many people in our white-majority culture have unconscious racial biases and react differently to a white face than a black face. In fact, we all, white and black, carry various biases around with us."

The purpose of these, and other legislative efforts that call for an increase in police accountability are to make a step towards saving lives and restoring public trust in an institution that is charged with protecting and serving the public. Martin Luther King Jr. said, "Injustice anywhere is a threat to justice everywhere. We are caught in an inescapable network of mutuality, tied in a single garment of destiny. Whatever affects one directly, affects all indirectly." Our garment of destiny has long since been ripped apart by injustice and broken trust. We have come a long way, but in light of all the police shootings and death, we are now arguing not for freedom from unjust prison sentences, but the ability to live long enough to stand before a judge to receive an unjust prison sentence.

It is the New Jersey Clergy Coalition for Justice's hope that at the State House Rally on Nov. 16, in attempt to mend the single garment of destiny by which we are all tied, that the threads of our repair are woven using as many colors, genders, ethnicities, political affiliations, and religions so as to resplendently represent the beautiful fabric of contemporary American society. When we gather on November 16 at the State House as a diverse body of people from a multiplicity of faith traditions, genders, ethnicities, and political persuasions, we will come together to affirm that black lives matter not only in words, but, with the above listed legislative actions, also in deeds.
____
1 Barak Ariel, William A. Farrar, Alex Sutherland. Journal of Quantitative Criminology. September 2015, Volume 31, Issue 3, pp 509-535.