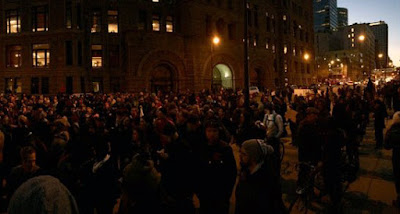 Police have arrested two men they have been seeking in connection with the shooting of five protesters the Black Lives Matter encampment Monday night.

Minneapolis police said they arrested a 23-year-old white man in Bloomington at 11:20 a.m. Tuesday. A second shooting suspect arrested in south Minneapolis at 12:05 p.m. has been released after questioning.

About 2:30 p.m., two men turned themselves in, police said, saying they were white, one age 26 and another age 21. They were being interviewed by investigators, officials added.

Authorities are weighing whether to treat the shooting of five people protesting near the Minneapolis Police Department’s Fourth Precinct station Monday night as a hate crime, sources familiar with the investigation said Tuesday morning.

The victims, all black men — ages 19 through 43 — were taken to hospitals with noncritical injuries, according to police.