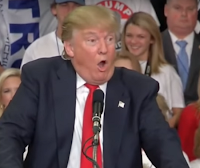 Now that we are in Mid-March of 2016, there have been multiple states holding “open primaries” — primaries in which a person of any party may choose in which primary they will participate: Alabama, Arkansas, Michigan, Mississippi, South Carolina, Tennessee, Texas, Vermont and Virginia.

This means that, if Donald Trump is right when he says “The African Americans love me,” black Americans will have departed the Democratic Party in droves in each state with open primaries to vote for the man they love so much: Donald Trump.

Did they? Let’s check American Community Survey and CNN exit poll data to find out.

Read more: In Open Primary After Open Primary, the Supposed Wave of Black Support for Donald Trump Fails to Appear

Posted by Councilman George L. Cook III at 5:31 AM