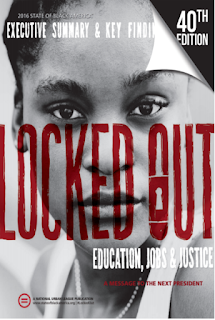 The National Urban League has released the 2016 State of Black America Report, Locked Out, Education, Jobs, and Justice.

Here are ten facts from the 2016 findings

Since 1976, Black unemployment has consistently remained about twice that of the white rate across time, regardless of education.

Black Americans are only slightly less likely today to live in poverty than they were in 1976.

Foreclosure crisis has left Black homeownership rates the same as in 1976, while white homeownership went up 5 percentage points.

The metropolitan area with the lowest Hispanic unemployment rate, at 4.6%, was Tulsa, OK,

There has been some progress: slow, ongoing reduction in poverty. Black poverty rate is 2.4 percentage points lower than in 1976.

Despite progress for Black America, there's been much less progress towards economic equality w/whites, especially in education.

Gap in civic participation between Blacks and whites has narrowed 7 percentage points since 1976.