Stopping the violence in black communities starts at home 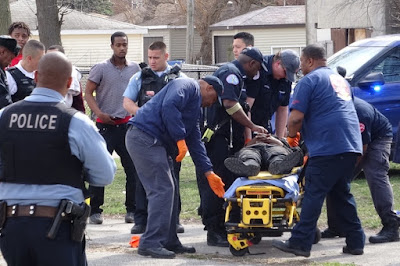 Every Memorial Day Weekend we all read or watch the stories on Facebook or other media about the number of people shot over the weekend in Chicago. Every year I hope that it's an old story from the previous year, which of course it is not. So far this Memorial day weekend at the time of this posting 49 people have been shot and 4 killed in Chicago.

That's all well in good and is most likely those things are true, but that doesn't negate the fact that we the black community must take some of the blame here too.

This is not about agreeing with Bill O'Rielly, Sean Hannity, and those of their ilk, f*ck them! This is about saving our young people dying on the streets including innocent young children riding their bikes or jumping rope. This is about us taking care of us.

Now I know that there are several organizations and churches out there working to stop the violence in black neighborhoods who get little to no press. I know some somehow think that President Obama can somehow do more to keep teenagers and young men children that live in OUR communities from killing each other.

But the fact is church leaders, organizational leaders, and President Obama are not in our homes teaching OUR/YOUR values and right from wrong. That's the parents job. If for some reason the parent can't or won't teach their children to value life then it falls on extended family and the community.

Our children must be taught from an early age that all life including theirs and those that look like them is valuable and not to be taken on a whim. The simple fact of the matter is that when people know better they do better. If a child does not learn that it's not the child's fault but ours.

Yes, we need more programs offering our young men and women more choices of things to do when not in school to keep them off the streets, but the onus is on us to not only demand but to implement those programs. Waiting on the government to fix this problem is like waiting on your cousin who owes you money to pay you back, it isn't happening. We have to not only march and holding prayer vigils but get to work actually doing something in our communities. As individuals, we can volunteer to coach or start a basketball team/league, start scouting troops in your community, mentoring programs, or after-school enrichment programs. I'm sure many of you can think of many more things that we as individuals can do.

We have to do better in keeping OUR children alive. Yes, we must call out government for their part in this, but we must also do our part.

Posted by Councilman George L. Cook III at 10:38 AM