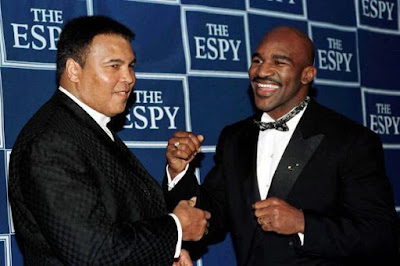 Boxing greats such as George Foreman, Mike Tyson, Manny Pacquiao ,Oscar De La Hoya, Lennox Lewis, and Evander Holyfield have responded to the death of The Greatest, Muhammad Ali. Read their statements below.

Remembering the good old days with Ali. RIP my brother I will never forget you. #MohammedAli #Legend #TheGreatest pic.twitter.com/TU7UFBGfcj

It's been said it was Rope a dope, Ali beat me with no his beauty that beat me. Most beauty I've know loved him pic.twitter.com/G64WX3eyZC

God came for his champion. So long great one. @MuhammadAli #TheGreatest #RIP pic.twitter.com/jhXyqOuabi

Manny Pacquiao releases a statement on the passing of Muhammad Ali. pic.twitter.com/hRa2kM3CLr

RIP @muhammadali, a legend who transcended sport and was a true champion for all. #thegreatest #MuhammadAli pic.twitter.com/vjmXlXaHip

A giant among men, Ali displayed a greatness in talent, courage & conviction, that most of us will EVER be able to truly comprehend. #RIPAli