The 2016 Olympics are now under way and I will be highlighting black athletes competing in the 2016 Summer Games in Rio. I would like to start of with someone who is from Newark NJ which is right next door to me. That person would be boxer Shakur Stevenson, who many believe gives the United States a good chance at earning it's first gold medal in boxing in 12 years. 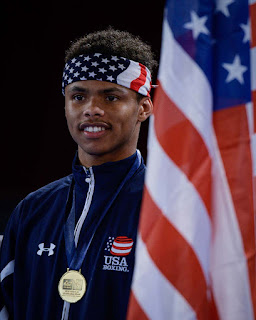 Shakur is the oldest of nine siblings and loves being a big brother...He proudly represents his hometown of Newark, N.J., and wants to bring something positive to the city that built him....Shakur began boxing at age five after his grandfather Wali Moses introduced him to the sport and he's been there ever since....He's known for shadowboxing all the time every where he goes. His grandfather jokes that he knew Shakur was awake as a kid because he'd hear that sounds of him shadow boxing...He's named after rapper Tupac Shakur...He's looking to follow in the footsteps of his idol and the last American man to win a boxing gold medal Andre Ward....Shakur has a perfect 23-0 international record and is the first American male to win junior and youth world titles and a Youth Olympic Games gold medal