Southside with You: Movie about Barack & Michelle's first date 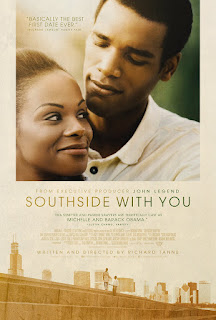 Some may have heard of a new movie titled Southside with You is being released this Friday August 26,2016 about the first date of Barack Obama and then Michelle Robinson, but I'm sure many more have not. The film has John Legend as an executive producer and stars Parker Sawyers (Zero Dark Thirty, Jack Ryan: Shadow Recruit) as Barack and Tika Sumpter (The Haves & the have Nots, Sparkle) as Michelle. Sumpter is also a producer of the film.

Inspired by Barack and Michelle Obama’s first date, SOUTHSIDE WITH YOU recounts the eventful summer day in 1989 when a young law firm associate named Barack Obama tried to woo lawyer Michelle Robinson during a daylong date that took them from the Art Institute of Chicago to a screening of Spike Lee’s Do the Right Thing to the site of their first kiss outside of an ice cream parlor. Watch the trailer below.

Posted by Councilman George L. Cook III at 10:42 AM