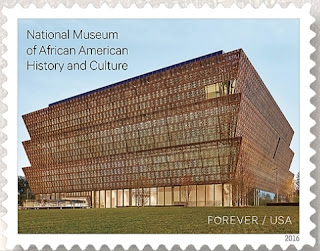 The United States Postal Service has revealed designs for several U.S. stamps that will be issued in 2017. One of those stamps will commemorate the opening of the National Museum of African American History and Culture.

Celebrations for the opening of the Smithsonian National Museum of African American History and Culture were underway as news of this planned forever stamp was revealed. The museum, on the National Mall, opened to the public with a dedication ceremony on the morning of Sept. 24

Established by an Act of Congress in 2003, the museum is described as the only national museum devoted exclusively to the documentation of African-American life, history, and culture.

“The National Museum of African American History and Culture will be a place where all Americans can learn about the richness and diversity of the African American experience, what it means to their lives and how it helped us shape this nation,” the museum notes.

The stamp is based on a photograph of the museum by Alan Karchmer showing a view of the northwest corner of the building. USPS art director Antonio Alcala designed the stamp.