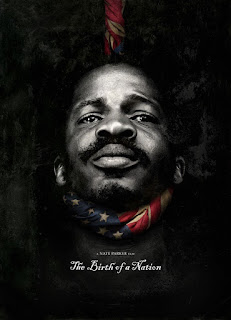 The Nat Turner biopic, Birth of a Nation starring, produced, written and directed by Nate Parker opens this weekend and if websites that report on movies are correct the movie is headed for an $8-9 million dollar opening. No doubt that the recent controversy over allegations that Parker raped a female student in 1999 while he was at Penn State and the women's later suicide has and will hurt the movies opening weekend.

The movie is being released through Fox Searchlight which also released 12 Years a Slave which had a $6.6 million opening weekend back in 2013 on it's way to a $56 million dollar gross. Like 12 Years a Slave there is Oscar buzz around Birth of a Nation. Whether that helps the film is yet to be seen. Below are predictions from three websites that predict opening weekend numbers.

...Fox Searchlight will open the film wide, instead of building up slow with the hopes of capturing awards attention. It will kick off in 2,100 theaters and should make $8 million.

I am a bit more optimistic about the movies opening weekend and feel that it can open in the $12-13 million dollar range because of the following reasons:

The film has some great reviews and currently holds an 78% rating on www.rottentomatoes.com

Good word of mouth could very well drive more moviegoers to the film on Saturday.

The opening of the National Museum of African American History and Culture has inspired much pride among African Americans about them and their history, this could drive some to see the film about a black historical figure.

The movie has some buzz among the black college crowd. It could be like the movie Malcolm X which was released when I was in school; it was a movie that you were just supposed to go to see if you were black.(Let's just hope that put the right movie title on the tickets this time).

So will you be going to see Birth of a Nation this weekend and how much do you think it will make?