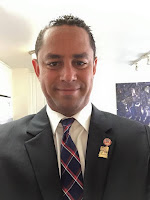 Here's one that has Donald Trump wondering why he didn't think of this first. Jon Girodes' a Republican candidate running for a New York State Senate seat to represent Harlem offered black voters watermelon, fried chicken, and Kool-Aid to attend a campaign rally. That's right Kool Aid cause you will need something to wash all this racism down with. I think Republicans insulted African Americans less when they weren't talking to us/them; the racist comments have only gotten worse with this so-called outreach. Watch the story on Jon Girodes' below. George Cook AfricanAmericanReports.Com