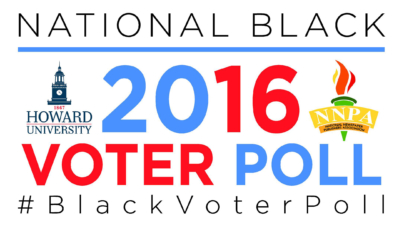 Despite his "outreach" to black voters and despite what Donald Trump and many conservative sites would have you believe, Trump's percentage of the black vote is not growing in any way. As a matter of fact according to a poll of over 21,000 black voters conducted by Howard University he is still stuck at 2% of the black vote.

The nation's largest and oldest trade association of Black-owned newspapers, the National Newspaper Publishers Association (NNPA), and the nation's leading academic and research Historically Black College and University (HBCU), Howard University, have announced the results of the National Black Voter Poll. Over 21,200 telephone calls across the United States were made by the NNPA-HU national polling center on the campus of HU to Black American telephone numbers throughout the United States from October 23-30, 2016.
Here are a few highlights:
Other more detailed information about the poll will be released at the press conference.
SOURCE National Newspaper Publishers Association (NNPA)
Posted by Councilman George L. Cook III at 8:04 PM