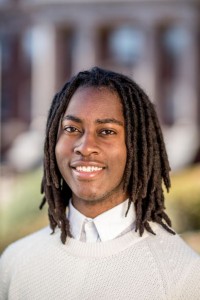 Howard University President Frederick announces another Rhodes Scholar to add to its legacy of producing Rhodes Scholarship recipients.
Cameron Clarke has been selected as one of 32 students nationwide to receive the prestigious 2017 Rhodes Scholarship.  Clarke is a double biology and community health major from Jersey City, New Jersey, living in Richmond, Virginia.
When he first enrolled at Howard University in the fall of 2013, Clarke arrived on campus as a high achiever with 42 advanced placement credits.  Clarke’s mother played an instrumental role in encouraging him to attend the University.
“I was hesitant at first because I didn’t want to look like I was following my older brother to college, who is a 2016 graduate of Howard,” said Clarke.  “My mom was the one who persuaded me to even visit.  It wasn’t until I arrived on campus for the Weekend at Mecca that I realized how much black intelligence was on this campus.  Some of the smartest, most dynamic people I had ever met were here in the same place.”
It was that moment that reassured Clarke that he was at the right place to take advantage of the numerous scholastic and research opportunities the University offered.
As a researcher at Howard University’s W. Montague Cobb Research Laboratory that maintains a national repository for African-American skeletal remains, Clarke has assisted in developing a database to combine information for the Cobb collection and the New York City African Burial Ground.
“Howard’s secret is that it has as many, if not more opportunities than a lot of Ivy League schools,” said Clarke.  “You have a lot of professors within your departments who will allow you to conduct independent research and gain publication experience as an undergraduate, which is amazing for both graduate school applications and your own intellectual development.”
With multiple research experiences already to his credit, Clarke has participated in faculty-led research at Bahir Dar University in Ethiopia through a Howard-National Science Foundation grant, in addition to studying at Columbia University’s School of Public Health.  This summer, Clarke conducted research at the National Institutes of Health’s Center for Cancer Research, as an Amgen Scholar.  Currently he works as an intern in the U.S. House Committee on Science, Space, and Technology, conducting science policy research for members and staff.
“This is definitely a great opportunity,” said Clarke.  “I’m ecstatic to receive this honor, and to have the chance to study primary health care and public health.”
After graduating from Howard next summer, Clarke will undergo a two-year program at the University of Oxford in England.  Ultimately, Clarke plans on going to medical school, working in public health policy and doing clinical research.
“We are extremely proud of Mr. Clarke's accomplishment,” said President Frederick.  “Mr. Clarke's academic pursuits will lead to solutions in the broader society that are needed ever more so today. Cameron is the epitome of Howard University's gift of solutions to the world.”
The Rhodes Scholarship program is designed to provide special educational opportunities for future world leaders over a two-year period at Oxford University in England.  Only 32 scholars (two from each of the 16 U.S. districts) are selected annually, based on scholastic achievement, leadership ability, strength of character and physical vigor among other qualifications.  Once admitted to Oxford University, Rhodes Scholars have the opportunity to read for the Oxford B.A. in any of a number of subjects or may be admitted to read for a higher degree. In some cases, study is extended to a third year.
“We are excited to add Mr. Clarke to our Rhodes Scholarship-caliber of students. He will be our fourth Rhodes Scholar that now includes scholars such as Mark Alleyne (1986), Carla Peterman (1999), and Marianna Ofosu (2003),” said President Frederick.