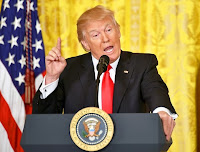 Donald Trump lied about the Congressional Black Caucus not reaching out to him during his epic rant/meltdown at a press conference on February 16, 2017. He asked American Urban Reports reporter April Ryan if she could set up a meeting with the CBC since they had not reached out to him. Problem is that the CBC sent him a letter on 01/19/2017. Read that letter below.

Posted by Councilman George L. Cook III at 9:54 AM