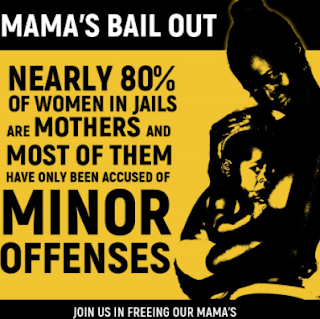 Money kept them in.Black love got them out.”

The week before Mother’s day organizations in Oakland, Los Angeles, St. Petersburg, Montgomery, Memphis, Minneapolis, Durham, Atlanta and beyond will bail out as many mothers as possible who otherwise would spend Mother’s Day in a cell simply because they cannot afford bail.
National Mama’s Bail Out Day will give incarcerated mothers an opportunity to spend Mother’s Day with their families and build community through gatherings that highlight the impact of inhumane and destructive bail practices on our communities!
We will bail out mama’s in all of our varieties — queer, trans, young, elder, and immigrant.

The impact of money bail on our Mamas…

Everyday an average of 700,000 people are condemned to cages and separated from their families simply because they cannot afford to pay bail. Since 1980 the number of incarcerated women has grown by 700%. Black women and Trans women are especially vulnerable to incarcerated. Black women are twice as likely as their white counterparts to be jailed. One in five transgender women have spent time in prison or jail and one in three of them reported being sexually assaulted while there.
Eight in ten incarcerated women are mothers and nearly half are in local jails, locked in cages for crimes they have not been convicted of. Most of the women in jail are accused of minor drug and ‘quality of life’ offenses and are languishing in cells simply because they cannot afford to pay bail.
In addition to the over $9 billion wasted to incarcerate people who have been convicted of no crime, pre-trial incarceration has catastrophic impacts on families and communities. Even a few days in jail can ruin a woman’s life. She may lose her job, her family may lose their housing and some even lose their children.

What we can do…

We can buy their freedom and push against mass criminalization and modern bondage!
In the tradition of our enslaved Black ancestors, who used their collective resources to purchase each other’s freedom before slavery was abolished, until we abolish bail and mass incarceration, we’re gonna free ourselves.
It is going to take our collective effort to give as many Black mamas their freedom this Mother’s Day, as possible. Now more than ever, we must support our people and dismantle this system that destroys our humanity and breaks up our families.