Black bussinessman is trying to trademark the N-Word 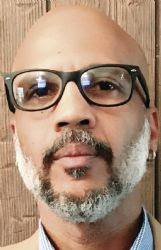 For 20 years, Curtis Bordenave said he has spotted oncoming trends and gotten out ahead of them. Most recently, that's involved efforts to profit from a racial slur.

His business, Better Moves Consulting, markets and sells clothing and other merchandise aimed at promoting unity, equality and understanding, he said.

In a roundabout way, he claims that mission is exactly why he is trying to trademark the N-word.

Bordenave of Columbus, who is African American, filed a trademark application in June with the U.S. Patent and Trademark Office for "Nigga," shortly following a U.S. Supreme Court decision that now allows trademarking disparaging language. The office accepted his application and assigned it to an examiner for review, a process Bordenave said could take up to a year.

In the meantime Business Moves Consulting is gearing up to produce products for the brand. Bordenave said it had already designed T-shirts and plans to produce soap, shaving cream, moisturizer and fingernail polish. He said a website where customers can purchase the products should be live next week, and the Nigga_brand Instagram page -- which had 16 followers as of Friday morning -- features mockups for the products.

"Our vision for the brand is not to disparage people, but to change the narrative and the meaning of the word," Bordenave said. "Products were sold with that name on it many years ago, and to say we can't change the meaning of that word is not really accurate.

"We give the word more power if we shelter it away, so that if anybody wants to just pull it out, it has a stink," he added. "We believe that we can change it."

He said the logo will be discrete on products, which will more prominently feature messages about inclusiveness and unity.

Should the brand grow to be successful, Bordenave said he wants to use funds to help African American students go to college and enable them to give back to their communities.