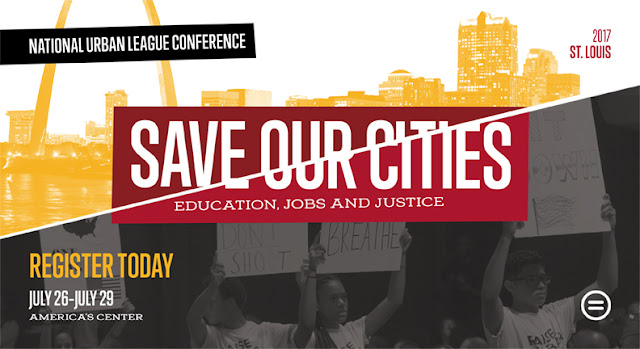 Symbolically gathered at a thriving community center built upon the ruins of a burned-out symbol of urban unrest, the National Urban League today convened its 2017 Conference.
"Transforming frustration and despair into opportunity and hope is the overarching theme of our Conference and our mission,” National Urban League President and CEO Marc H.  Morial said. "We’re so proud to showcase the Community Empowerment Center of Ferguson as a successful example of the work of the Urban League Movement and our committed partners.
“Save Our Cities: Education, Jobs + Justice,” the theme of the 2017 National Urban League Conference campaign is an examination of the challenges facing urban communities, particularly as the shift of power in Washington, D.C., brings sweeping changes to the nation. Continuing through Saturday at America’s Center, the nation’s largest civil rights and social justice conference attracts thousands of the nation’s most influential community leaders, together with top policy-makers, academicians, business leaders and artists.
“As longtime supporters of the Urban League Movement, Centene is pleased to welcome the conference to our hometown of St. Louis,” said Michael F. Neidorff, Chairman, President and CEO of title sponsor Centene and President of the National Urban League Board of Trustees. “I can think of no better city than St. Louis to host our conference this year. St. Louis is a city that is stepping up to the challenge of working to create positive social change. Since the ensuing unrest of 2014, our experiences – particularly in Ferguson – can serve as an example of this progress that can be made when businesses, community organizations and elected officials work together for the transformation and betterment of a community at large.”
Also on hand for the ceremonies was Lezley McSpadden, the mother of Michael Brown the unarmed teenager whose death at the hands of Ferguson police sparked days of unrest there in 2014.
Two major plenary sessions focus on the State of Black America, the National Urban League’s seminal annual analysis of the social and economic status of African Americans, and the Main Street Marshall Plan, a comprehensive outline for combating poverty and eliminating disparities
“World Wide Technology is honored to be a title sponsor of the conference,” Vice President of Human Resources Ann Marr said. “We are proud of our cultural diversity that exists within our global organization.  Corporate and social responsibility is important to WWT and we are passionate about supporting our community.  We are committed to many organizations like the Urban League and we will continue to advance these programs.   We than all the dignitaries and thought leaders joining us at the conference; it will be an incredible event.”
The four-day event at America’s Center features empowering sessions and workshops presented by political, business, and entertainment leaders and influencers on topics including education, business, the economy, health, and justice.  The N.U.L. Experience Hall, free and open to the public, includes exhibits, entertainment, a Volunteer Zone, Health Zone and chances to win exciting prizes.  Participants in Saturday’s Small Business Matters entrepreneurship summit will have a chance to audition for ABC TV’s Shark Tank, or win cash prizes at the Pitch Contest.
Also partnering to present the conference are longtime Urban League supporters Toyota, Nationwide, UPS and Target.
Backpacks and school supplies will be distributed to thousands of community members at the Back-To-School Community Empowerment Festival Community Day on Saturday, which features health screenings and other informative and entertaining exhibits and sessions.
Notable speakers, panelists and honorees include: