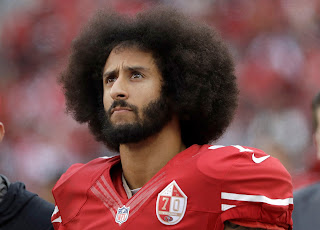 Items pertaining to Colin Kaepernick will be part of the Black Lives Matter collection at the Smithsonian's National Museum of African American History and Culture.

"The National Museum of African American History and Culture has nearly 40,000 items in our collection," Damion Thomas, the Washington museum's sports curator, told USA Today Sports. "The Colin Kaepernick collection is in line with the museum's larger collecting efforts to document the varied areas of society that have been impacted by the Black Lives Matter movement."

Thomas had previously told USA Today Sports that items would include a game-worn jersey and shoes.

Kaepernick, as a member of the San Francisco 49ers, kneeled during the playing of national anthem throughout the 2016 season. The free agent quarterback said he was protesting racial inequality and social injustice in the country.