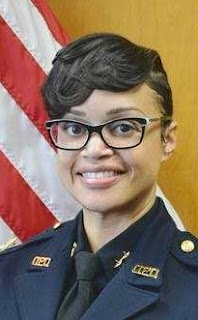 Portland Mayor Ted Wheeler has hired Danielle Outlaw to bring stability to a police department that has had a revolving door of leadership.

Outlaw is the first black woman to become chief of police in Oregon's largest city. But at her introductory news conference Thursday, Outlaw said she just wants people to see her as Danielle.

"I realize I wear many hats and I represent a lot of things to many people," she said. "And because of that there's an added responsibility and expectation placed on me — and I own that."

The 41-year-old Outlaw has spent the past 19 years with the Oakland Police Department, rising to deputy chief. Wheeler selected her from a pool of 33 candidates in a national search.

Outlaw already has one fan in town, and it's a prominent one in a place that loves its NBA team. Damian Lillard, the Oakland-raised star of the Portland Trail Blazers, posted a story about Outlaw's hiring to Twitter and wrote: "Oakland to Portland with it... #Hello."