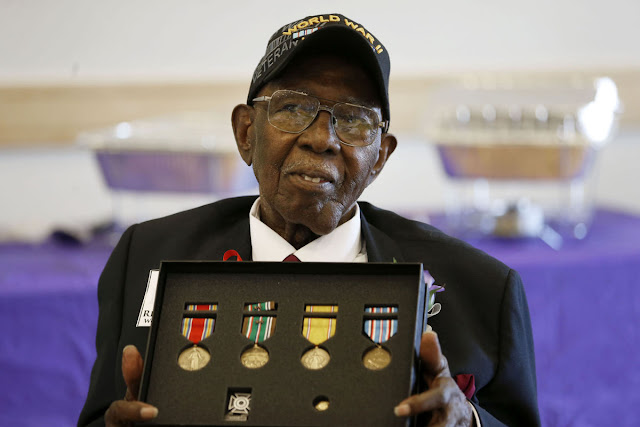 Richard Bell Jr. made the 12-hour, overnight hauls by starlight.

A driver during WWII in the famed Red Ball Express, he was one of a group of primarily African-American servicemen responsible for speeding supplies to the front lines in France after the invasion of Normandy.

“No lights, period,” he said. “You took the fuse out of the truck. That’s the way you did it.”

After the war, Bell was honorably discharged and returned home to Baltimore where he worked 30 years at Bethlehem Steel.

Now 99 and living in Blackstone, his great-nephew was preparing a family history when he discovered that Bell had been awarded a series of medals but never received them.

“When I saw that he had these awards, I asked to see them,” said Benjamin Sessoms Jr., an Ettrick resident. “He looked at me and said he didn’t have them. I said, ‘Did you lose them? What happened?’ He said he just didn’t have them.”

Bell said he’d never been that concerned about it: “To tell you the truth, I wasn’t worried about any medals at the time. I was worried about getting home.”

Undeterred, Sessoms made it his mission to see that his great-uncle receive the honors he had earned.

Posted by Councilman George L. Cook III at 9:58 AM