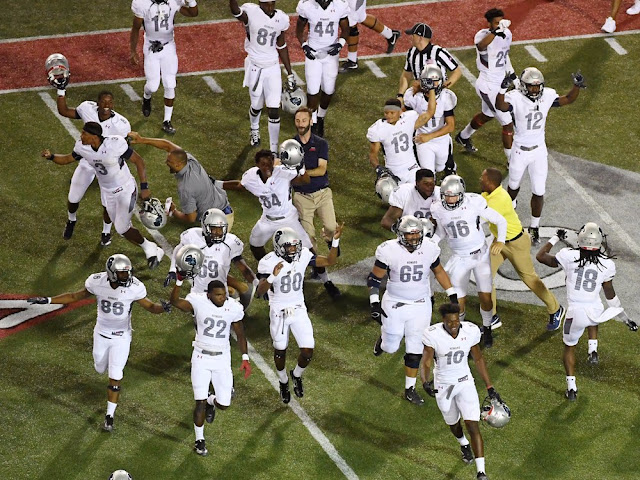 Some guest just don't follow the rules. UNLV (University Nevada Las Vegas) paid HBCU Howard University $600,000 to show up and get beat up in Las Vegas, but the Howard Bison (1-0) had other historical ideas.

Led by the little brother of Cam Newton, Caylin Newton and Coach Mike London the Howard Bison defeated the UNLV Running Rebels 43-40 recording the biggest upset in college football history based on the betting line. Newton threw for 140 yards and one touchdown while rushing for 190 yards and two touchdowns to lead his team to victory.

UNLV was favored by 45 1/2 point over Howard and no team that was a 45 plus point Underdog had ever won. To put into perspective how much of an underdog Howard was a $100 bet would have won the person betting $55,000.

“It’s a very humbling experience to be a part of something that you can talk about forever,” London said, between responding to “a gazillion text messages” and breaking down the win with his mother.

“My players, the guys, I’m telling you, they are sky high right now regarding confidence, in terms of belonging,” London went on. “We talked about how this was a business trip. This wasn’t the old typical I-AA, it’s your money game, and we’re going to be cannon fodder for this team. We came here to win the game, and that’s what happened.”

This marks the first time that Howard has beaten a team in College Football's top division the FBS.

Posted by Councilman George L. Cook III at 9:35 AM