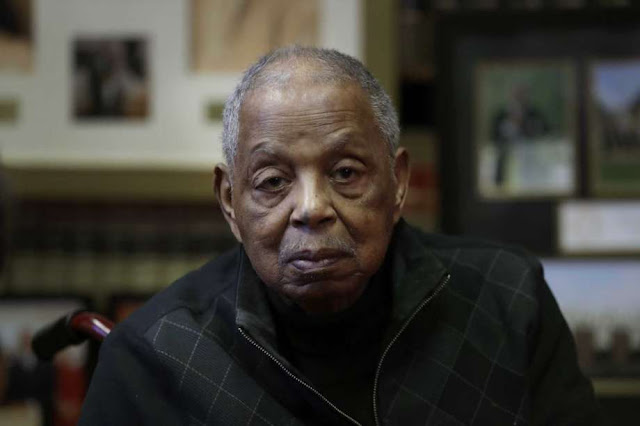 Judge Damon J. Keith thinks back on his 50 years on the federal bench and remembers many tumultuous and significant times, including being sued by President Richard Nixon after ruling that wiretapping couldn't be done without a court order.

The 95-year-old from Detroit, the only African-American among six current federal judges who have served 50 or more years according to the Administrative Office of the U.S. Courts, still hears cases about four times a year at the 6th U.S. Circuit Court of Appeals in Cincinnati. His approach — in or out of the spotlight, on or off the bench — is the same: Fight for the Constitution, not with each other.

"Just treat everyone with dignity," said Keith, who will be honored at a gala Saturday in Detroit for reaching the half-century mark.

The phrase "Equal justice under law," which is etched onto the U.S. Supreme Court building in Washington, drives Keith and reminds him of lessons Thurgood Marshall taught him as one of his professors at Howard University. Marshall became the first black Supreme Court justice in October 1967 — the same month Keith, a prominent lawyer in his own right by then, was appointed to the federal bench.

"And that's what I've tried to do," Keith said last week at Detroit's historic federal court building, where he's had an office since President Lyndon B. Johnson appointed him to the federal district court 50 years ago.

In 1970, Keith ordered a bus policy and new boundaries in the Pontiac, Michigan, school district to break up racial segregation.

A year later, he made another groundbreaking decision, finding that Hamtramck, Michigan, illegally destroyed black neighborhoods in the name of urban renewal with the federal government's help. The remedy was 200 housing units for blacks. The court case is still alive decades later due to disputes over property taxes and the slow pace of construction.